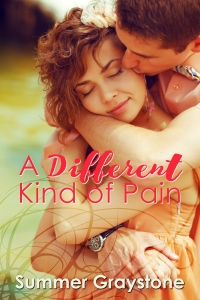 Today I’ve got a little something different to share with you, and I know you won’t be disappointed. Summer Graystone is visiting with some information about her literary novel, A Different Kind of Pain, which has a beautiful new cover. Reviewers rave about this story and report that it is a moving, sweet, satisfying read. (It’s also pretty sexy; I think you’ll agree after you read the excerpt included below.)

About A Different Kind of Pain

There was just something about them, about the couple in the picture. An ad for a caregiver for a beautiful woman ― a woman who was dying. Though Melia’s sass and rough-around-the-edges attitude meant she couldn’t take every job out there, she should’ve been able to handle this one. There was a problem though ― a big one. The dying woman’s husband, Luka. Those brilliant, haunted eyes of his… did something to her. They were the kind of eyes a girl had no defense against. Maybe she could take the job ― but she wondered if her heart could. Falling for a man she could never have ― and should never have ― was simply wrong, no matter how right she knew it would be. Sure, she needed the pay… but there was a whole lot more at stake here than money.

For Luka, life had become one thing ― waiting. For a cure, for a miracle, for the end. For the one that Susan was convinced would be coming, Of course, he didn’t really believe it, that the plan his beloved wife had cooked up would ever really work. But if she wanted something, he’d move heaven and earth to give it to her. Even this, no matter how much it might hurt, no matter how wrong, how insane the very idea was. Then with one look at the gorgeous Melia, he allowed himself the one thing he’d never allowed himself to feel, not since that final diagnosis. Hope.

Give me this one thing, she’d told him. Give me this one last wish for my husband before I’m gone. Let me leave him a piece of me ― in the form of another woman, another sub to kneel for him, to obey him. To love him. It didn’t matter how much he argued it, how much he refused ― he knew he’d give in, even on this. For though she might have been his in all ways, bent her will to his, and obeyed him as her Master, she was the one who really held the power ― and always had.

Could this crazy plan really work though? Would Luka be able give Susan this one last wish, something more profound, more precious than he ever deserved?

The one thing that none of them were prepared for though, was that love ― and the selfless giving of that love ― could come at a terrible cost… to the heart and the soul.

“Goodnight, Melia,” he whispered. He was unusually close to her, causing her to have to look up at him. He looked down at her upturned face, her glowing dark eyes lit up like onyx stones. It took every fiber of his being not to kiss her luscious, slightly parted lips. They were both panting lightly. He could tell she wanted him, and he wanted nothing more than to satisfy her. He closed his eyes and took a deep breath, trying to gather the strength to tear himself away from her.

“Good night, Luka,” she said and reached back for her doorknob. Slinking in sideways, she slipped into her bedroom.

Before she could close the door Luka caught her wrist in an iron grip and pulled her back into the hallway.

Luka pushed Melia against the wall and pinned her hands above her head. Melia felt Luka’s sizeable erection brush up against her, and she gasped as Luka clamped his mouth over hers. He kissed her roughly with all of the pent-up desire of the previous weeks. He kissed her until his lips had gone slightly numb, until he couldn’t breathe anymore. His hands roamed freely and aggressively over her body. Melia moaned into Luka’s mouth, and he pushed up against her, grinding his hips into hers, until Melia was panting and whimpering with want. He pinned her again and slipped his hands into her pajama bottoms. She was dripping wet, and his breath caught in his throat as he moaned into her ear.

Get To Know Summer

Summer Graystone is a college student who loves Starbucks! She lives in South California with her four legged dachshund puppy, Nikki. When she’s not locked away in her classrooms, doing homework, she can generally be found tucked in the corner of the local Starbucks having a strawberry frappuccino. You can always find her with her laptop working on her latest novel that is guaranteed to make your panties wet. She loves to hear from her readers! Email her at summergraystone@outlook.com

Thanks for stopping by, Summer!

One thought on “A Different Kind of Pain by Summer Graystone”