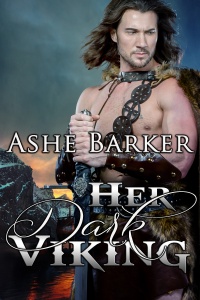 He saw her. He wanted her. So he returned to take her.

There have been so many hot releases lately, it’s hard to find time for all of them. This one is definitely going to the top of my list, though, after reading the spanking excerpt included in this post. Enjoy!

About Her Dark Viking

After she is captured by Viking raiders, twenty-five-year-old Mairead is left with no choice but to depend on Gunnar Freysson, the battle-hardened leader of the Norsemen, to protect her and her young children. Though he makes it clear that she is his property to do with as he pleases, Gunnar shows remarkable concern for Mairead’s wellbeing, and when she risks her life in a dangerous attempt at escape he does not hesitate to strip her bare and spank her soundly.

The strict punishment leaves Mairead thoroughly ashamed yet helplessly aroused, and when Gunnar takes her in his arms and claims her properly she cannot deny her body’s response to his dominant lovemaking. As the days pass, Mairead realizes that Gunnar cares for her deeply, and despite her situation she finds herself falling in love with the stern, handsome warrior. But can she truly give her heart to the man who took her from her home?

Publisher’s Note: Her Dark Viking is a stand-alone sequel to Her Rogue Viking. It includes spankings and sexual scenes. If such material offends you, please don’t buy this book.

Would a spanking hurt as much as his belt had? Did he perhaps intend to use his belt again? He had not said, she simply assumed he would–

“Lie across my lap and lift up your sark.”

He interrupted her musings with his curt instruction. Gunnar had seated himself on the edge of the bed, where just a few moments ago Donald had sat. The Viking regarded her over his shoulder, his eyes as dark as she had ever seen them and his expression stern.

She had questions, her head brimmed with them, but she supposed all would be answered soon enough. He kept his belt on, which was a relief she supposed. Mairead slipped from the bed and came around to stand before him.

“Shall I take this off?” She plucked at the fabric at the front of her undershirt.

“No. I want you to get in position then raise the sark for me. You will get yourself ready, bare your bottom for me to spank.”

Oh, sweet Jesu. Something coiled and tingled between her legs, and she sensed a fluttering within which she could not quite name but she knew her most private places were dampening at his words. It would have been difficult to remove her clothing for him, but she had done it once and could manage again. This different approach of his was more intense, more humiliating. She was to aid in her own punishment by arranging herself just so.

“Mairead, do not keep me waiting.”

“No, Jarl.” She almost flung herself across his thighs, her head dangling down by his boot and her hair sweeping the floor. She dreaded what she must do next but wanted to get it over with so she reached back to grab the hem of her linen shirt and hastily pulled it up to her waist, then tucked the bulk of the material under her stomach to ensure it remained in place. She was horribly embarrassed, prayed that no one would see fit to open the curtain and see her thus. Had Aigneis managed to get Donald out of the longhouse in time?

“What are you thinking?” His tone was soft, and she took courage from that.

“I am afraid someone will hear, or come in.”

“They might, but there is nothing you can do about any of that now. None of what is to happen to you is under your control so you might as well let it go. Relax, if you can, and surrender.”

“I do not mean to fight you, Jarl. Or to struggle.”

“I know that.” He laid one warm, solid palm on her bottom and rubbed a large circle around her left cheek. “I was thinking more of what is happening in your head. You need only to feel this, not think overmuch about it.”

“I… I will try, Jarl.” Her voice fell to a breathy whisper. Her bottom was still tender from yesterday and as he pressed her delicate skin those sensations returned. How much more punishment could she take?

“You know why this is happening.” It was a statement, not a question.

“Yes, though I now rather think you misunderstood my instruction rather than deliberately disobeyed. You should have checked, asked me to clarify.”

The first volley of spanks were light, teasing almost. Gunnar rained slaps down on both her buttocks, covering the sensitive globes and causing her to clench and writhe on his lap, but not to cry out. It was painful, but not overly so and there was pleasure in it too, especially when he paused to caress her smarting skin. Now she moaned, but in startled delight rather than pain.

She nodded, but then realised he may not have seen her. “Yes, Jarl.”

“Will you spread your legs for me?”

“Of course.” On one level, she had no choice, he would make her do as he wanted though he did phrase the command most politely. But on another this was exactly what she desired, what she had hoped for. Punishment, submission, sensuality – these were a heady mix and she no longer knew quite how to separate them, or even if she wished to. So she parted her thighs and lay still.

“So pretty, and so wet.” He slid his hand between her thighs and stroked her soaking folds. Mairead tensed under the sudden wave of lust which seemed to engulf her. “Did I hurt you?” His voice was soft now, and achingly seductive.

“No, it was … more pleasant than I remembered.”

“I see. And this?” Now he toyed with the pleasure nub he had awakened yesterday. Mairead stuffed her fist in her mouth in an attempt not to squeal out loud.

Her muffled response clearly did not suffice. He dropped two hard slaps, one on each buttock. “I expect you to talk to me, to answer if I ask you a question. If you do not understand what I want of you, you may tell me that since I know our tongue is still new to you.”

“It is very nice, Jarl.” She blurted the reply out fast, fearing another onslaught of slaps and craving them at the same time.

“And this?” Now he circled her entrance with his finger tip.

“This?” His finger entered her, just to the first knuckle she thought. “Any pain?”

“No, it feels wonderful. Perhaps you might… I mean, maybe a little more?”

“You have hurt me. You are spanking me, Jarl. It is meant to hurt, is it not?”

“The spanking, yes. Not this.” He swirled his finger between the swollen, sensitive lips. “You only gave birth a month ago.”

“I am healed, truly I am. The birth was easy, and… oh! Ooooh.” She let out a sob as he slid his whole finger into her.

“Tell me, Mairead. Is this painful?”

“Greedy wench. You will take your spanking; then, if I am satisfied you have learnt better manners, I will give you what you desire.” A Note from the Author

I have always been fascinated by Vikings. Strong, sexy warriors, ruthless, dominant and determined – what’s not to like? It was only a matter of time before I wove a story around these fierce raiders who rampaged through Scotland and England for over three centuries, eventually settling and leaving their indelible mark on our history.

A Viking raid was indeed a ferocious affair. They relied on what would nowadays probably be termed ‘shock and awe’ swooping in from the sea on their fast dragon ships to attack with vicious and deadly effect. The Nordic raiders would be gone almost as swiftly as they arrived, leaving a trail of destruction in their wake. The modern equivalent would be a helicopter attack on a sleepy rural village by SWAT teams armed with automatic weapons– the local people would hardly know what hit them.

I have employed a certain amount of poetic license, but in writing this series of stories I have been determined to recreate the Viking era to the best of my ability – their homes, their clothing, what they ate, how they lived. I hope readers will be as entranced as I am by these creative and charismatic raiders, and perhaps forgive them their more outrageous little foibles.

Ashe tends to draw on her own experience to lend colour, detail and realism to her plots and characters. An incident here, a chance remark there, a bizarre event or quirky character, any of these can spark a story idea.

Ashe lives in the North of England, on the edge of the Brontë moors and enjoys the occasional flirtation with pole dancing and drinking Earl Grey tea. When not writing – which is not very often these days – her time is divided between her role as taxi driver for her teenage daughter, and caring for a menagerie of dogs, tortoises.  And a very grumpy cockatiel.

Ashe has a pile of story ideas still to work through, and keeps thinking of new ones at the most unlikely moments, so you can expect to see a lot more from her.

Ashe loves to hear from readers. Here are her social media links:

Or you can email her direct on ashe.barker1@gmail.com

2 thoughts on “Her Dark Viking by Ashe Barker”