Today I’m excited to have Jane Henry and Maisy Archer visiting my blog to share information about their new release, My Dom. This is the first book in what will be a series of D/s stories called Boston Doms. In addition, I’m hosting a giveaway of this book! To participate, all you have to do is comment on this blog post or the Facebook post within 48 hours, and your name will be entered in a raffle. I loved this book, and my review of it comes a bit later. But first, here’s a little more info about this sexy read.

Heidi considers herself a strong, independent, professional—definitely not the type to fall for a macho, dominant alpha-male like her neighbor in 6F. Yet when she overhears his kinky, sensual escapades one evening, she finds herself as intrigued as she is horrified. Surely that’s not spanking she’s hearing? And are those whimpers from the woman in his bed caused by pleasure or pain? She tells herself she is not attracted to…whatever they are doing. But when she has an unfortunate run-in with Mr. 6F himself, the connection is electric. To her great consternation, she finds herself imagining what it would be like to be under his authority, or bound to his bed.

But when Heidi and Dom are thrown together in an unlikely series of events that tie them together professionally, they must separate business from pleasure. Or will they?

“So, sorry again about this,” she said, lifting her hands to indicate the dog, Tammy, and herself. “I’ll just take Prin…”

“You know, we have rules in this complex,” he said, folding his arms across his chest and walking… stalking… slowly down the stairs. “Rules about dogs,” he elaborated. “And leashes.”

“Those rules protect everyone’s safety,” he concluded when he was standing right in front of her.

“I know… I just… It was kind of an emergency,” she stammered. “And I was holding the leash. I didn’t expect her to pull away like that.”

“Sounds to me like you need a firmer hand on the leash.”

He did not just say that to me.

Heidi looked up at him, eyes widening in amazement at the double meaning, but his return look was bland. God, she was paranoid.

She cleared her throat.

“It won’t happen again,” she promised.

“See that it doesn’t,” he said softly but sternly, sending an uncontrollable flush of warmth through her body and making her fucking traitorous nipples harden again, right there on the spot.

Quickly folding her arms across her chest once more, a quick glance at his face told her he suspected exactly what she was trying to hide.

My Dom is the kind of book that makes you smile and sigh the whole way through. The emotions of both characters are well explored in this sweet and steamy read about dominance and submission, and the dialogue is fresh and amusing. It takes Heidi overhearing her neighbor’s not-so-vanilla activities to awaken her need for an alternate type of romance than what she’s courted in the past, and it takes meeting Heidi for Dom to fully understand what it means to be dominant in more than just the bedroom. When he finds the woman he ultimately falls in love with, his dominance manifests itself through a protective streak a mile wide, and Heidi feel cherished and loved like never before. However, it’s not all sunshine and roses. These two end up being thrown together in their work, the two must reevaluate their new dynamic. If you like a romance story with an erotic edge and a healthy dose of D/s, you’ll love this book. I did!

Don’t forget to comment on this blog post for a chance to win My Dom for free in a raffle!

Jane has been writing since her early teens, dabbling in short stories and poetry. When she married and began having children, her pen was laid to rest for several years, until the National Novel Writing Challenge (NaNoWriMo) in 2010 awakened in her the desire to write again. That year, she wrote her first novel, and has been writing ever since. In 2012, she became interested in the d/s lifestyle, and has discovered her love for writing romance with a d/s twist. With a houseful of children, she finds time to write in the early hours of the morning, squirreled away with a laptop, blanket, and cup of hot coffee. Years ago, she heard the wise advice, “Write the book you want to read,” and has taken it to heart. She sincerely hopes you also enjoy the books she likes to read.

Maisy is an unabashed book nerd who has been in love with romance since reading her first Julie Garwood novel at the tender age of 12. After a decade as a technical writer, she finally made the leap into writing fiction several years ago and has never looked back. Like her other great loves – coffee, caramel, beach vacations, yoga pants, and her amazing family – her love of words has only continued to grow… in a manner inversely proportional to her love of exercise, house cleaning, and large social gatherings. She loves to hear from fellow romance lovers, and is always on the hunt for her next great read.

These two put together some fabulous teasers for this book, and in my opinion they’re too good not to share here. Enjoy these images that explain in a few words what this book has to offer. Y is for Yummy! 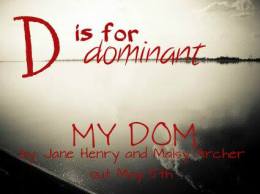 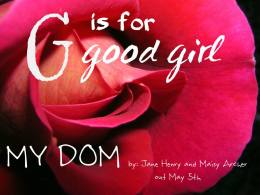 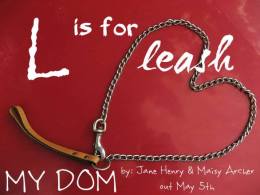 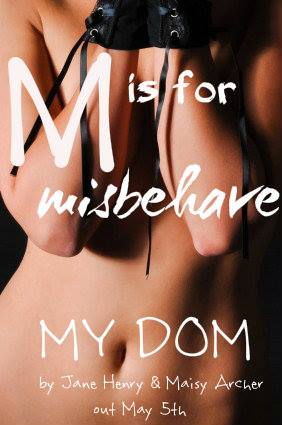 One thought on “My Dom by Jane Henry and Maisy Archer”