Update: Get this story along with 12 others for a great deal on Amazon or Blushing Books.

Good morning! It’s time for Saturday Spankings, and what great timing because my little novella Christmas with Callie is now available. If you’ve read Corralling Callie, the characters will be familiar to you, since it’s a sequel, but the novella can easily be read as a standalone. 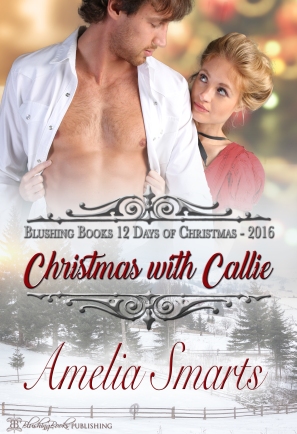 About Christmas with Callie

Growing up a poor orphan without family or connections, Callie has always relied on telling tall tales to sound impressive and get herself out of scrapes. Now that she’s married to Jude, a loving but stern husband, she feels more secure and less inclined to brag and lie. Old habits die hard, however, and she finds herself unwilling to admit to her new husband that she can’t cook, even as Christmas approaches and people plan to join them for supper at their ranch.

Callie thinks she’s pulling a fast one on Jude. Every day she walks the mile to town, purchases two dinners to go from the restaurant, and returns home to lay out the meal before Jude returns home from the range. Every evening as they dine together, she explains in detail how she has cooked each item on the plate.

Jude is aware of his wife’s deception and hopes she’ll come clean instead of requiring discipline to correct her behavior but, after weeks of the cooking ruse, he determines that enough is enough and his bride is due a sound spanking. Just when it seems that all has been set straight, an enemy from their journey west makes a second appearance in their lives, accusing Callie of theft. She vehemently denies her involvement. Will Jude be able to protect Callie from getting in trouble with the law, considering the mounting evidence against her? And will Callie learn how to cook in time to make Christmas with Callie a success?

Note: This story is a standalone sequel to Corralling Callie containing sexual scenes and domestic discipline in the form of spankings.

“Did I say you could turn your head?” he asked.

She faced the wall again. “You didn’t say I couldn’t,” she mumbled defiantly.

He sighed and walked toward her. Once he reached her, he peppered her bottom with stinging smacks with the spoon, which caused her to yelp and buck against the corner. She hadn’t expected the swats to feel so sharp and painful right away, but the wet spoon packed a stinging wallop.

“Running your sassy mouth isn’t going to help you, young lady. You’re being disciplined, and I expect respectful responses. Is that clear?” He landed a final hard swat that made her dance from one foot to the other.

She let out a breath, puffing up the hair on her forehead. “Yes, sir.” She wanted to turn around and stick her tongue out at him, but she wisely refrained.

Click here to read more spanking excerpts from other authors. Enjoy the rest of your hop!

It’s time for Saturday Spankings! I’ve got a great snippet for you, if I do say so myself. This excerpt is from Christmas with Callie, which will be released as part of Blushing Books’ 12 Days of Christmas anthology. I first wrote about Jude and Callie in Corralling Callie, and they are two of my favorites as far as characters go. So, without further ado, here is a little of what you can expect from these two when their story is released in December:

“Go to the room, remove all your clothes, and stand with your nose to the corner. You’re about to get the spanking of your life.”

She reached back to clutch her bottom, which already stung from Jude’s impromptu swats. She looked at him with wide eyes. “All of my clothes? You want me to take off everything?”

He placed his hands on his hips. “Did I stutter?”

He raised an eyebrow as she continued to stand in place. She was very reluctant to set in motion the punishment, which she knew was going to be terrible, judging by how serious Jude looked.

“I’m going to count until you get to the room, and that’s going to be the number of licks with my belt you’ll be getting after the rest of your spanking is finished. He began counting at a quick beat. “One, two, three…” 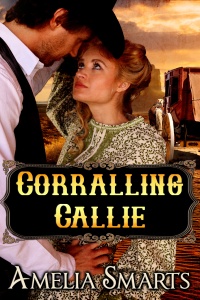 Any guesses as to how high Jude counted before Callie obeyed?

If you don’t want to wait until December to read about these two, on you can read the first chapter of Corralling Callie on my blog.

Click here to read more spanking excerpts from other authors!