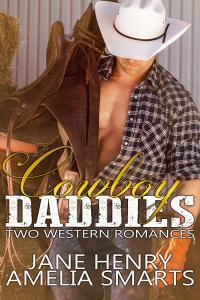 What’s better than one Daddy Dom? You guessed it: Two! I’m thrilled to announce that Cowboy Daddies: Two Western Romances has hit the shelves. I wrote one of the stories, and Jane Henry wrote the other.

This is the first book I’ve written that takes place in a contemporary setting as opposed to the old west. You’ll notice, however, that it’s still a western like my other books. I didn’t veer too far off course!

It was fun to write about a ranch that has pickup trucks in addition to horses. My cowboy uses a cell phone. Not once did he have to ride to town and send a telegram, and spankings did not involve removal of drawers and petticoats. Ha!

I loved writing this story. One thing I’ve noticed as an author is that some stories just seem to flow, like they were dammed up in my brain waiting to be set free. This was one of those stories.

Part One by Amelia Smarts

Eighteen-year-old orphan Abigail Jones has been doing her best to survive while also saving money to put her younger sister through college one day, but when she takes up residence in an abandoned bunkhouse at a ranch she quickly ends up in trouble with the ranch’s owner.

After he catches Abigail trespassing and riding his favorite horse without permission, Clay Ashton scolds her thoroughly. He also makes it clear that she’ll be coming back to his house for a proper meal, whether she likes it or not, and when the beautiful, sassy girl refuses to accept his charity he doesn’t hesitate to take her over his knee for a sound spanking.

Though being punished like a naughty little girl leaves Abigail blushing crimson, she cannot deny her body’s reaction to Clay’s strict chastisement, and soon enough she is calling him daddy and promising to be good. Over the coming weeks she learns what it means to be guided, corrected, and cared for by a firm but loving daddy. But when her pride causes her to make a terrible mistake, can Clay show her that no matter what she will always be his little girl?

In the three months since she came to live with Abigail and Clay, eighteen-year-old Daisy Jones has grown ever more enthralled by the ranch’s tall, ruggedly handsome foreman, Shane Weston. Unfortunately, Shane seems to view her as nothing more than a naughty little girl, and he even threatens to spank her if her irresponsible behavior disrupts Abigail and Clay’s wedding.

After Abigail and Clay depart for their honeymoon, Daisy’s defiant attitude and constant disobedience finally push Shane too far and he puts her over his knee for the spanking she so desperately needs. Ashamed yet undeniably turned on, Daisy looks with different eyes at the man who has taken on the role of her strict but caring daddy.

Taming a girl as headstrong as Daisy will not be easy, however, and Shane’s firm-handed correction will frequently be required to keep her in line. But when Daisy’s past mistakes come back to haunt her and she deceives Shane about the situation, will he discover the truth and teach his little girl never to lie to her daddy again?

“All right, that’s it,” he growled. “Seems like the seat of your jeans is in need of a good dusting. I warned you.” He strode to a stump, sat down, and proceeded to roll up his sleeve. “Come here and lie over my lap.”

Her mouth dropped open. He’d finished securing his sleeve and had splayed his right hand on his knee before she found her tongue. “You’re out of your fucking mind if you think I’m going to just walk to you to get… s-sp…”

“Spanked?” he finished for her. “Watch your language, especially when you’re about to be punished. And you are going to come and present yourself over my knee because if you don’t do so in the next thirty seconds, I’m going to do it for you, and if I have to do that, it won’t be a few swats with my hand. I’ll take my belt to you.”

Her eyes rounded into two large saucers. She shook her head. “Okay, okay. You win. I won’t swear anymore, and I’ll ride back to the barn and accept a meal.”

He almost smiled, remembering how he used to promise to behave in the vain hope it would get him out of a punishment, but it was always too late, just like it was too late for her. “You certainly will, after your spanking.”

She took a step back. “Please… Don’t hurt me.” Her eyes had lost all of their defiance and conveyed only fear.

She was right to be apprehensive about a spanking. Spankings hurt, after all, but he didn’t like that she looked so afraid. He held out his hand, and his voice was gentler when he spoke. “Come here. It’ll hurt, but not too badly and the pain won’t last.” He wouldn’t abandon the discipline. He always followed through on his word, but he almost wanted to forego it after seeing the look of fear in her eyes.

Luckily, his words seemed to allow her fear to abate slightly, though she still looked plenty worried. He was pleased when she walked to him, and when she placed her hand in his and allowed him to pull her over his lap, that earned her a ‘good girl.’

Her jeans stretched tight around her cheeks, prominently displaying her feminine curves. She was a pretty little brat, and she seemed so very small and vulnerable now that all her big talk had gone silent and she was positioned to receive a spanking. When he smoothed his hand over her bottom, her breath hitched. His hand looked giant resting on her small form, and it made him aware of how much he would need to hold back in order not to punish her too harshly.

“So, you’ve been calling me Dad like a rebellious teenager and goading me, which makes me believe this kind of paternal discipline is just the thing for you.”

Buy the book to read the rest!

In just two more days the book I wrote with Jane Henry will be released. We’re both excited to share these stories with you. They include two hot, stern cowboy daddies and a couple of feisty ladies who give them a run for their money. Take a look at this cover from Stormy Night Publications! Naughty excerpt included below it.

“You have a beautiful body, Abigail.”

She peeked up at him through her lashes. His face lacked any sign of humor. “You don’t know that,” she informed him.

Without removing his gaze from her face, he reached out and took hold of the end of the robe’s belt, which was tied into a bow. Before he pulled it loose, he studied her eyes, giving her time to protest. Instead, she bit her bottom lip and stared back into his eyes, mesmerized. A ghost of a smile pulled at his lips, and his eyes warmed as he drew the end of the belt toward him. The two sides of the robe parted, causing a whoosh of air to caress her stomach.

Ever so slowly, he took hold of each lapel and drew the material over her shoulders. Then he dropped the robe to the ground, where it pooled around her naked body. Her flesh heated as his eyes roamed downward, lingering on her breasts before continuing its journey south. His gaze caressed her skin, and heat licked through her body. Her breathing became shallower as she stood accepting his examination of her body, which seemed both intensely sexual and pragmatic.

When his eyes eventually met hers again, they were smoldering. “Now I know,” he said, his voice a low rumble.

She swallowed. “So I guess you don’t just think of me as just a naughty little girl,” she said with a nervous squeak. “I was kind of worried that’s how you saw me.”

“Far from it,” he responded in a growl. “I see you as a beautiful grown woman who needs a daddy.” He picked up the ruler and slapped it once against his palm. “And baby, you’ve found one.” He pointed at the smooth surface of the desk with the ruler. “Bend your beautiful naked body over the desk and present your bottom to Daddy for discipline.”

Sign up for my newsletter to get an alert when the book has been released as well as another excerpt. https://goo.gl/forms/5AGV2pe18bzGPkOo1

The amazing Jane Henry joins my blog today with a hot excerpt from her latest release. I had the pleasure of beta reading this book, and you’re not going to want to miss it. In this dark western, the author handles the complexity of the hero’s character expertly. Cole is a true anti-hero but you find yourself liking… END_OF_DOCUMENT_TOKEN_TO_BE_REPLACED

Jane Henry and Maisy Archer have a new Boston Doms book out, and it’s topping the Amazon charts and garnering rave reviews! I’m not at all surprised, especially after reading the excerpt below. Whew! About His Babygirl  Alice Cavanaugh learned early that the only person she could count on was herself. As a single mom, she works hard… END_OF_DOCUMENT_TOKEN_TO_BE_REPLACED

Jane Henry has written another wonderful western full of domestic discipline and romance. If you liked reading about Pearl and Aaron in Claimed on the Frontier, you’re going to love Samuel and Ruth. After the untimely death of her harsh, overbearing husband left her a widow at the age of twenty-three, Ruth Watson vowed that she… END_OF_DOCUMENT_TOKEN_TO_BE_REPLACED

Jane Henry joins my blog today with an excerpt from her new release Claimed on the Frontier, a western spanking romance that has been soaring up the charts. I’ve read this book twice. It’s that good! If you love a fierce, dominant hero and a sweet but ornery heroine who receives well-deserved punishments, you’re not going to want to… END_OF_DOCUMENT_TOKEN_TO_BE_REPLACED

Good morning! Today I’m blogging about Sunstrokes: Four Hot Tales of Punishment and Pleasure, a collaborative project between me and fellow authors Maisy Archer, Jane Henry, and Susannah Shannon. Each story features characters from our published books. Maisy wrote about Dominic and Heidi from My Dom; Jane revisited Meredith and Paolo from her Bound to You series; Susannah… END_OF_DOCUMENT_TOKEN_TO_BE_REPLACED

Today I’m excited to have Jane Henry and Maisy Archer visiting my blog to share information about their new release, My Dom. This is the first book in what will be a series of D/s stories called Boston Doms. In addition, I’m hosting a giveaway of this book! To participate, all you have to do is comment on… END_OF_DOCUMENT_TOKEN_TO_BE_REPLACED

Today Jane Henry joins my blog with her new release Begin Again, a contemporary D/s romance. This is book  one in the Bound to You series. Book two, Come Back to Me, is coming soon! Jane is new to Blushing Books but not to writing, and she has a great style. Don’t believe me? Check… END_OF_DOCUMENT_TOKEN_TO_BE_REPLACED