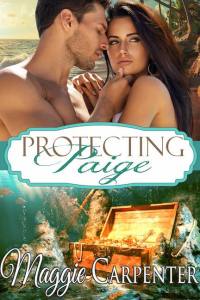 Award-winning and bestselling author Maggie Carpenter joins my blog for the first time to discuss her latest release, Protecting Paige. If you like a sexy dominant on a mission to protect an impetuous woman, this is the book for you.

Cole Barrington, a sexy dominant and a movie producer with a reputation as a player, has been haunted by one particular young lady who unexpectedly tugged his heart strings during a five-day romp on a tropical island. Why she ducked his calls on their return he has no idea, and the question still shadows him.

Paige Brooks is a publicist, and when she learns she must accompany Cole to an annual charity event at the same Caribbean island where she’d spent an idyllic week with him, she grits her teeth and clenches her fists. The man broke her heart. How can she possibly get through it?

Thrown together on a tiny seaplane, as they fly to the private island where the event is to be held, fate throws them an unexpected curve ball. Forced to land near a tiny uninhabited island, they suddenly find themselves completely stranded and alone. Their intense attraction soon fires their passion, and when they’re drawn into a wild treasure hunt, Cole must use his dominant skill to control the impetuous woman from the perils surrounding them.

If you enjoy a suspenseful romance starring a take-charge alpha male, and a feisty young woman with a sharp wit and impetuous nature, look no further than this panty-melting page-turner from Maggie Carpenter.

As Cole slipped her dress over her head, Paige rolled into him and urgently grabbed at the buttons of his shirt, but grasping her wrists he pushed her onto her back and pinned them on either side of her head.

“We’ve got all night,” he softly murmured, “and I’m going to make the most of every minute. Don’t move.”

Rising to his feet, he leisurely stripped, then returning to lie at her side, he slid her panties down her legs and popped the front fastener of her bra. As it sprang free he slid it down her arms and tossed it aside, then kneeling over her, he gazed at her in wonder; the huge setting sun was cloaking her skin in a golden glow.

“You’re even more lovely than I remember,” he crooned, then straddling her body, he sent his grasp back to her wrists, lowered his lips, and began kissing her neck.

“I know,” he purred, traveling his lips across her shoulders toward her breasts. “I remember the things that make you crazy. I’ve relived them many times.”

She moaned in response, and as he drew in her nipples, sucking hungrily, she raised her chest to meet his mouth.

“Remember what I said?” he murmured, lifting his head and locking her eyes.

“Does that mean you don’t remember?”

“I can’t stand it,” she complained. “Remember what?”

“My promise to spank you. I promised when we were together before, and I promised you a few minutes ago. I think it’s time I kept that promise.”

“Seems as good a time as any,” he said with a wicked grin, and releasing her wrists, he quickly flipped her onto her stomach and yanked up her hips.

“You do have an incredibly spankable ass.”

“So what?” he asked, smoothing his hand over her backside. “So embarrassed?”

“That’s natural, but I’ll bet…” he said, his voice trailing off as he slipped his fingers between her legs, “uh-huh, you’re soaked, and in a few minutes you’re going to be even more soaked. Now keep still, and don’t shout out like that again.”

“I know you’ve been craving this.”

“How could I be craving something I’ve never had?”

“Now you’re just being coy. I think I’ll add a few extra slaps for that.”

“There is no why. It’s just how God made you, and I’m the other side of that coin. Are you ready?”

“Nope, I need more than that.”

Though her voice had been filled with trepidation, he’d also heard excitement, and raising his hand, he brought it down with several quick slaps, not hard, but carrying a sting that would not disappoint her.

“I said no shouting.”

“Here, bury your head in this,” he suggested, reaching for her dress and handing to her.

“You might. I won’t spank you too hard, but it’s still going to hurt.”

“Unless you’d rather I stop. Do you want me to stop, Paige?”

“Right then, roll up your dress and bury your head.”

Though he didn’t think her yelps or the sound of his smacking hand would carry around to the rocky point to Jack’s ears, having her muffle her squeals in her dress added some extra spice to the moment, and waiting until she was settled, he began to land his slaps in an easy rhythm as he traveled his flattened palm across her cheeks. When she began to squirm, he moved his slaps lower, and after adding a few good swats to her sit spot, eliciting a series of mewling cries, he paused and ran his hand over her warm pink skin.

“How are you feeling?”

“Please, will you touch me?” she begged, turning her head to look at him over her shoulder.

“That was not the answer to my question,” he said firmly, delivering a solid smack to the center of her bottom. “How are you feeling?”

“And again,” he declared, landing another hard slap.

“How are you feeling?”

“My ass is stinging, how do you think I feel?”

“I can’t believe you just said that,” he muttered, shaking his head and grinning at her nerve. “Anything else?”

“We don’t always need to know why we like something, now close your eyes and feel my hand rub away the burn. That was your introduction.”

Award-winning and best-selling author Maggie Carpenter has published over fifty romance novels, and is the recipient of a number Spanking Romance Reviews awards spanning a variety of genres. Her readers describe her work as, romantic, funny, suspenseful, beyond a five-star read, exciting romance with a ton of surprises.

Her work includes a best-selling twelve-book contemporary cowboy series, Cowboys After Dark, (http://amzn.to/2ihCNtp), a warrior fantasy trilogy, Warriors After Dark, (http://amzn.to/2iE0cDa) contemporary love stories, and several Victorian romances. His Willful Bride was a #1 best-seller for several weeks and a BookBub Feature Deal. She is best known for her smart, witty, strong-willed women who  bring unexpected challenge, mystery and humor into the lives of passionate, dominant men.

Maggie has a history in show-business both in front of and behind the camera, but moved from Los Angeles to live in the Pacific Northwest to pursue her writing. She is an equine enthusiast who rides every day, and writes until the wee hours of the morning when her eyes close only because they must.

One thought on “Protecting Paige by Maggie Carpenter”