In just two more days the book I wrote with Jane Henry will be released. We’re both excited to share these stories with you. They include two hot, stern cowboy daddies and a couple of feisty ladies who give them a run for their money. Take a look at this cover from Stormy Night Publications! Naughty excerpt included below it. 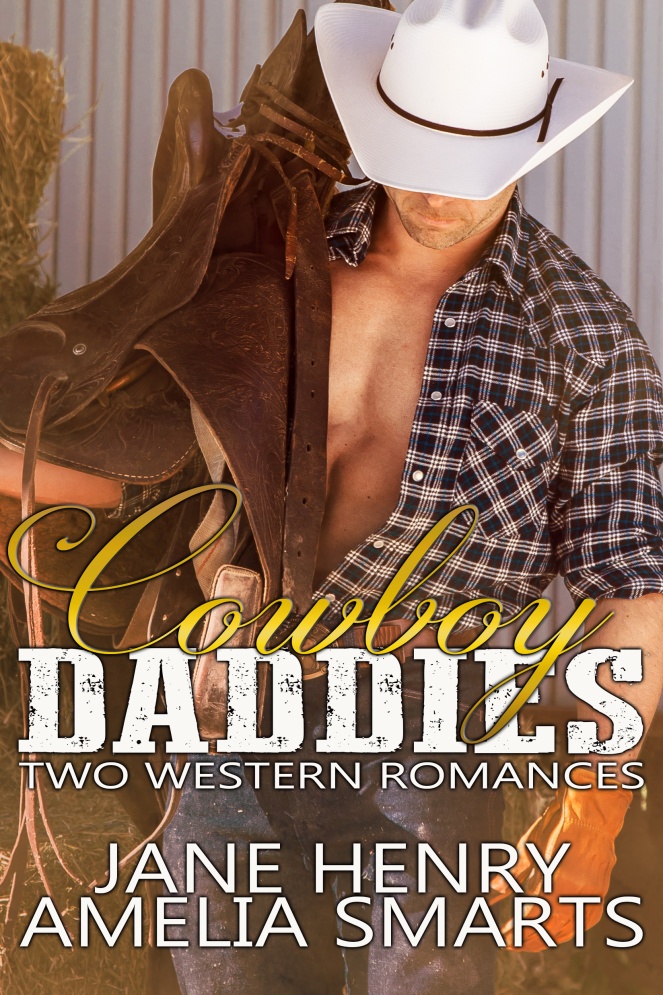 “You have a beautiful body, Abigail.”

She peeked up at him through her lashes. His face lacked any sign of humor. “You don’t know that,” she informed him.

Without removing his gaze from her face, he reached out and took hold of the end of the robe’s belt, which was tied into a bow. Before he pulled it loose, he studied her eyes, giving her time to protest. Instead, she bit her bottom lip and stared back into his eyes, mesmerized. A ghost of a smile pulled at his lips, and his eyes warmed as he drew the end of the belt toward him. The two sides of the robe parted, causing a whoosh of air to caress her stomach.

Ever so slowly, he took hold of each lapel and drew the material over her shoulders. Then he dropped the robe to the ground, where it pooled around her naked body. Her flesh heated as his eyes roamed downward, lingering on her breasts before continuing its journey south. His gaze caressed her skin, and heat licked through her body. Her breathing became shallower as she stood accepting his examination of her body, which seemed both intensely sexual and pragmatic.

When his eyes eventually met hers again, they were smoldering. “Now I know,” he said, his voice a low rumble.

She swallowed. “So I guess you don’t just think of me as just a naughty little girl,” she said with a nervous squeak. “I was kind of worried that’s how you saw me.”

“Far from it,” he responded in a growl. “I see you as a beautiful grown woman who needs a daddy.” He picked up the ruler and slapped it once against his palm. “And baby, you’ve found one.” He pointed at the smooth surface of the desk with the ruler. “Bend your beautiful naked body over the desk and present your bottom to Daddy for discipline.”

Sign up for my newsletter to get an alert when the book has been released as well as another excerpt. https://goo.gl/forms/5AGV2pe18bzGPkOo1