I’m excited to share that the third standalone book in my Mail-Order Grooms series, Justice for Elsie, is live on Amazon! It’s only $2.99 or free if you’re a Kindle Unlimited subscriber. This will likely be the last book published as part of this series.

To some of you, the book may look familiar because it’s an expanded version of a story that appeared in the Hero Undercover anthology, called Justice, Roughly. I decided to develop it a bit and release it as part of the Grooms series.

About Justice for Elsie

Elsie Fin is hell-bent on revenge against her father’s murderer. She develops a successful cattle-rustling operation as payback but is soon in over her head. That’s when she decides she needs a good husband, a man strong enough to take control and loyal enough to protect her from the law, so she places a mail-order groom advertisement in the paper.

While Elsie seeks her groom, she hires Wyatt Parker to help her around the ranch. Little does she know, he’s actually an undercover deputy tasked with gaining her trust and verifying the marshal’s suspicion of her theft.

Wyatt never imagined a beautiful, sweet woman like Elsie would be the mastermind behind such a serious illegal activity. Soon his loyalties are split between the law and a woman whose kindness and vulnerability bring out powerful feelings of tenderness in him.

Compelled to protect the wayward woman, Wyatt makes covert plans to rescue her, reasoning that Elsie is more in need of a spanking than life in prison. But will she end up behind bars or married to her mail-order groom before Wyatt can reveal his feelings for her and carry out his plan to save her?

Warning: Justice for Elsie is a historical western romance containing sexual scenes and domestic discipline, including punishment spanking. If these themes offend you, please don’t buy this book.

Author’s note: This is an expanded version of the story previously titled Justice, Roughly, which appeared in the Hero Undercover anthology.

Catch Up on the Other Books in this Series

Although Justice for Elsie is completely standalone, if you haven’t read the first two books in the Mail-Order Grooms series, you might want to grab them now! Handling Susannah is only $0.99 and Catching Betsy is only $2.99. Of course, they’re all free for Kindle Unlimited subscribers. 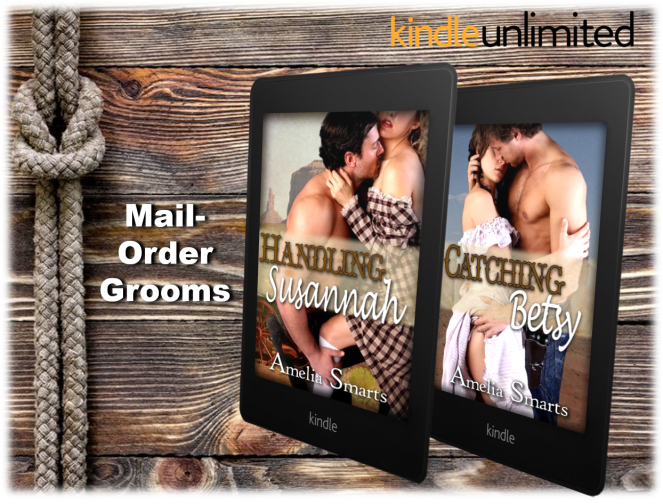 Excerpt from Justice for Elsie

Elsie’s heart pounded. What had caused Wyatt such anger? He strode the few steps to her and grasped her arm near the shoulder. “You have a death wish, woman?” When she didn’t respond, he asked, “What were you thinking, drawing your gun on a man having words with me? He could have killed you!”

“I-I wanted to protect you,” she stammered, trying to wrench her arm free, to no avail. His grip wasn’t tight enough to inflict anything more than discomfort, but it was unyielding. Wyatt was a powerful man, much more powerful than she’d realized.

“I don’t need you to protect me, Elsie,” he bellowed. “I don’t need any woman coming in the middle of my argument with another man, putting herself in danger on my behalf.” He gave her a shake. “You listening to me, woman?”

She’d never seen this severe, chastising side to Wyatt, and she felt desperate for him to understand her motivation. “But it’s not your fight, it’s mine. And you’re injured! I didn’t want him to hurt you.”

“I would prefer for me to lose a fistfight than for you to lose a gunfight… or win one, for that matter, and end up in prison!” He walked with purpose toward the front of the barn, hauling her along with him.

“What are you doing?” she squeaked, though she had a strong suspicion of his intention when he dragged her in the direction of the bench.

He sat down and dragged her between his legs before toppling her over his right knee. Wyatt wrapped his other leg over hers, pinning her in place. His left hand fell in such a hard swat on her clothed bottom that she gasped and arched upward.

“Teaching you a lesson about safety,” he growled. Grasping the waist of her trousers, he tugged them down, while she squirmed helplessly between his legs.

She felt mortified when the cool morning air wafted over her bare bottom. Before, she’d felt some measure of control. Now she felt like a bad little girl, helpless to prevent her punishment, especially when he proceeded with giving her naked backside a proper, no-nonsense tanning. Sharp swats peppered her bottom and the tops of her thighs, causing such a sting that tears flooded her eyes nearly immediately. “Stop this, Wyatt! I’m ordering you to stop.”

“Order away, missy,” he responded, smacking even harder. “You aren’t in charge at the moment.” Her whole bottom blazed, with each spank igniting a new fire on her poor unprotected cheeks.

“Ha!” he responded. “I don’t know of anyone who deserves this more. Would your pa have let you go and do something so dangerous without consequences?”

His mention of her father brought forth a new wave of grief and pain. She’d acted recklessly ever since her father’s death, a result of hatred for her neighbor and grief over how her pa had died before his time. No one had ever cared to stop her. “No, he would want me safe. Please, it hurts…”

He stopped spanking and rested his hand on her hot bottom. “I want you safe too, Elsie. I care about you. That’s the only reason I’m blistering your backside.”