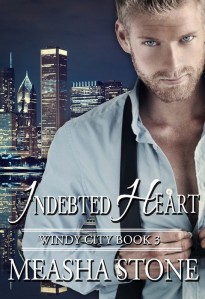 She works so hard to earn a place in the world, but all he wants is for her to find a place in his heart.

I love having people on my blog who haven’t been before, especially when I’ve already read and enjoyed their work, as is the case with Measha Stone. I’ve had the pleasure of reading the first book in her Windy City series, and she’s here to chat about her latest addition to the series. Indebted Heart is seriously sexy if it’s anything like the first book and if the excerpt below is any clue. Check it out! But first, here’s a little more about the story.

Alyssa Sanders has taken care of herself since she was too young to do so. But she’s all grown up and ready to get her life on the right track.  She heads to Chicago with her life savings and a few prospects. She expects to get a job, find an apartment and get on her way of settling down. What she doesn’t expect is to find her new boss not only severely attractive and Dominant, but the son of an old friend.

Alex Trebelli would do anything for his father, so when he’s asked to escort an old friend’s daughter to dinner he doesn’t hesitate to agree. Except the daughter isn’t the small town young woman his father described. She’s all grown up, full of beauty and curves, and a submissive nature that draws out his dominant side.

When Alex explains he won’t be her friend, he can’t just be her friend, he wants more, he wants to be her dominant, her boyfriend, she has to decide if she’s going to take the leap. She’s never been good at a full time D/s relationship, but Alex makes her feel safe and secure. She finds him easy to be with, even when he’s being overprotective and bossy.

Can she manage to put aside her fears of failure, and self-doubt and give them a real chance, or will she chose the safer route and keep clear of his sexy smile, and dominant ways?

He wasn’t asleep. He was standing in the middle of the room, exactly where she had stomped away from him, holding his belt in his right hand. Her eyes darted to the loosely hanging leather at his side and then his expression. Dark. Extremely dark. His lips were pursed his jaw set tight, and his eyes fixated on her with a sternness she hadn’t believed him capable of until that moment.

“Uh-um.” She stammered standing just outside the bathroom staring at his hand that was swinging the belt and casually tapping it against his leg. “Uh.” What was wrong with her? Why couldn’t she get a full word out, and why wasn’t he saying anything?

“I think I’ve been pretty patient. I haven’t demanded anything. I haven’t encroached on your plans, have I?” His voice held steady, no tremor or indecisiveness to it.

She swallowed. “Well. No, not really.”

“I haven’t told you what to do, what to wear, where to go, anything like that?” He took one step toward her and her stomach twisted.

“Yet, when I try having a conversation about your health, your wellbeing—you feel it’s respectful to blow me off and stomp away. Slamming doors.” His tone didn’t waiver, but the volume had lowered. She found herself holding the hem of her shirt with both hands, and twisting the fabric with her fingers.

“Not when you say it that way,” She tried a smile, a little humor. It didn’t faze him or deter him, he took another step toward her. He wasn’t wearing his suit jacket anymore, she noticed. His button down shirt that was neatly tucked into his beltless slacks had been rolled up at the sleeves. She wanted to bolt back into the bathroom but her feet were being entirely too uncooperative. “Alex.” She sighed. “I’m sorry. I told you. I’m not good at this.” His raised eyebrow told her it might not have been the best tactic.

“Good at what? Being respectful?” The slapping of the belt against this leg became more intense.

“The full time submissive thing. I’m not good at it. I told you that.” She really wished he wouldn’t take another step. One more and he’d be within touching distance and since her feet still wouldn’t obey her, she was sure he’d grab her.

“When we talked about us becoming a couple, us doing this, I told you I would help you with that.” He reminded her with a calm in his voice. He looked upset yes, irritated even, but not angry. Not out of control anger. She knew he was in complete control of himself, and even her with the way he kept looking at her. It was as if running wasn’t an option, her feet understood that before her brain did, apparently. The bastards.

“Well, yes. I remember.” Her answer came softly. He had said that, and she had agreed. She had always enjoyed the submissive side of herself. Not just sexually. She’d had enough play time at the dungeons to know she loved the kiss of the flogger, but it was when the scene ended that the real cravings began. She’d seen couples at the parties, even at Top Floor. The caring between the partners, the love, and respect the dominants showed their subs, and it was reciprocated. That’s what she craved. The dominance that continued after the flogging.

And here it stood. Right in front of her holding a leather belt.

“Have you ever been spanked, for punishment?” He asked, not moving toward her any more.

Also in the Windy City Series

Hidden Heart, Book 1
A woman given up on love, second guesses her solitary life when meeting a man who won’t take no for an answer and opens her eyes to an entire world of pleasure she didn’t know existed before him. http://amzn.to/2amTYDP

Secured Heart, Book 2
A headstrong, fiery woman seeks to fulfill her fantasies in all the wrong places, and it’s up to the security expert to tame her, and keep her safe. http://amzn.to/2ahqIDG

So first, of course, the obvious question. How did you become a writer? I’ve been doing it since I was a little kid. I didn’t really think anything of it until my mom pointed it out to me much later.  In Junior High we had to write a short story for the open house, and all the other kid’s stories were one page, a few paragraphs, mine was the only one that took two pages and had dialogue and everything. She knew then I was going to be a writer. When she told me that story, I figured, hey, she’s right!  Silly, that I needed someone else to say it in order for me to know it, but writing stories was just something I did for fun, to entertain myself.

Name one entity that you feel supported you outside of family members. Blushing Authors have been a huge help, especially with this release. Everyone is so helpful and genuine. It’s been a great experience and hopefully the first of many.

What do you like to do when you’re not writing? I still have a day job, but in the off hours, if I’m not writing, or thinking about writing, I’m usually curled up with a book. If my kids happen to actually be home instead of off playing with friends, we’ll spend time together watching old sitcoms on Netflix, or having a family game night.

Does Prince Charming exist? Yes! Everyone’s version of what he looks like is different, but he’s out there.  For some, he’s an Alpha male that won’t give an inch and is unreasonably strict, to other’s he writes poetry and sings her sonnets – and anything in between. I lean toward the relentless Alpha myself, and have been lucky in that department.

Which body part would you choose to get a tattoo done? I celebrated my first book with Blushing Books by getting a tattoo of a heart on my right wrist.  I’m planning to get two more, another heart design on my ankle, and one on the top of my foot the words “Happily Ever After”.

The furthest I have traveled was to: Germany. My husband was in the Army when we married and was stationed in Darmstadt, Germany. It was a great time, even though I was far away from family and friends. I was sad to hear the base has been shut down since then.

Do you like your handwriting? Absolutely not!  My father always called it chicken scratch, and I have to agree. It’s horrible. I have a love/hate feeling when someone asks me to sign their book, because it’s just so bad.